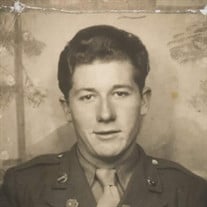 William Russell “Did” Quarles, lifelong resident of Bearden, Arkansas departed this life October 21, 2020. “Did” as he was known around Bearden, is now telling stories to family, friends and other WWII veterans. They are all laughing as he did love a good story. Did was born February 8, 1927 to the late Fred Quarles and Annie (Wilson) Quarles. Did was preceded in death by his brothers Hershel and Carlton, sisters Christine Roark, Maxine Couch, Francis Deadmond and Ann Gresham. He is survived by his wife, Joye Anne (Graham) Quarles after 72 years of marriage, one son Howard Russell and daughter-in-law Susan Dowling-Quarles of Little Rock, daughter Susan Holmes and son-in-law Robert of Bearden, three grandsons, Paul and Alan Holmes of Bearden and Special Agent Thomas Russell Quarles, C.I.D., United States Army, and wife Jessica Albrecht Quarles of Honolulu, Hawaii, brother Maurice and wife Charlotte Quarles of Bearden, three great-grandchildren Henry, Evelyn and Roland Quarles of Honolulu. Hawaii and numerous nieces, nephews, great nieces, and great nephews. Did was a veteran of WWII serving with the 2nd Calvary, Tank Destroyer Division, a 50-year Master Mason, City of Bearden alderman for 31 years having served with his father and father-in-law and seven different mayors. Did was an ardent gardener and grew roses and tomatoes that were cherished by many in Bearden. An avid deer hunter, he loved hunting on land in Bearden owned by the Garrett family who graciously allowed the Quarles family access based on mutual family history. He was a lifelong member of the First Assembly of God Church in Bearden and until his passing was the oldest member of the First Assembly of God Church in Bearden. He loved singing in the choir as well as solo. He retired from Highland Resources in East Camden. Visitation will be Friday, October 23, 2020 6:00 pm until 8:00pm at Benton Funeral Home in Bearden. A celebration of his life will be 11:00 am Saturday at the First Assembly of God Church in Bearden with Rev. Matthew Castleberry officiating. Burial arrangements will be by Benton Funeral Home. He will seek eternal rest in Moss Cemetery, Bearden. In lieu of flowers, he would like contributions made to the First Assembly of God Church P.O. Box 479 Bearden, AR 71720. To sign the online register visit www.bentonfuneralhome.net.

William Russell &#8220;Did&#8221; Quarles, lifelong resident of Bearden, Arkansas departed this life October 21, 2020. &#8220;Did&#8221; as he was known around Bearden, is now telling stories to family, friends and other WWII veterans. They... View Obituary & Service Information

The family of William Russell "DiD' Quarles created this Life Tributes page to make it easy to share your memories.

Send flowers to the Quarles family.