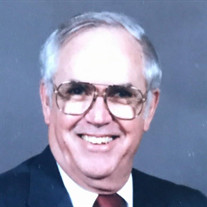 William “Bill” Donald Lynn was born on April 7, 1933 and in a glorious moment on May 29, 2019 at the age of 86, he went home to be in the presence of his Savior. He was born in Fordyce, AR, the youngest of seven children. Bill graduated from Fordyce High School in 1951. Like many of his generation, he worked hard at a young age at several local businesses. After high school, he worked at the arsenal in Camden. He then began his adventurous career as an accountant for Badger Construction Company (later Raytheon). Over a period of thirty three years, the family lived in twenty three cities. He then ventured as an entrepreneur and worked for John Brown for a couple of years. In retirement, he enjoyed many fun trips and made many memories with his grandchildren and great-grandchildren. Bill was an active member of First Baptist Church of Fordyce for over 40 years. He was an avid golfer, accomplishing his only hole in one in 1981. His family was always one of his top priorities. He had a wonderful sense of humor that entertained those around him. Bill married Mary Janette Barnes August 23, 1957. She survives at their home in Fordyce. Additional survivors include son, Rusty Lynn and wife Carol of Fordyce, son Jerry Lynn and wife Holly of Arnaudville, LA, and daughter Linda Harton of Fordyce; seven grandchildren, Jennifer Hooks, Kelli Wright, Jase Harton, Janna Huneycutt, John Lynn, Chris Lynn, and Anna Christiansen; five great-grandchildren, Brady and Cullen Wright, Christian and Beckham Hooks, and Oakley Christiansen. He was preceded in his Heavenly arrival by his parents, James Nathaniel Lynn and Birthel Mae Johnson Lynn, and his siblings Ruby Mae Parham, Juanita Monroe, Hazel Haralson, Robbie Lamb, Ilene Meyers, and James Lynn. Bill was a wonderful husband, father, grandfather, and great-grandfather. He was a man of great integrity. He will be greatly missed. The family will receive friends 1:00 p.m. to 2:00 p.m. Friday at Benton Funeral Home in Fordyce. Funeral services will be 2:00 p.m. Friday at the Benton Funeral Home Chapel with Rev. Rusty Ross officiating. Burial will follow at Stoney Point Cemetery. Arrangements are by Benton Funeral Home of Fordyce. To sign the online register visit www.bentonfuneralhome.net.

The family of William "Bill" Donald Lynn created this Life Tributes page to make it easy to share your memories.

Send flowers to the Lynn family.