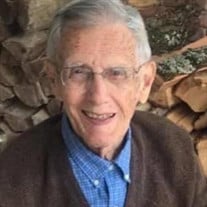 William Bruce Acruman, Jr., age 89 a long time Fordyce resident, passed away early Wednesday morning, August 26, 2020 at the home of his daughter in Rockdale, TX. Bruce was born October 19, 1930 in Warren, Arkansas to William Acruman, Sr. and Goldia Brown Acruman. After his high school graduation Bruce graduated from Little Rock Junior College. He later served in the Arkansas National Guard from 1947 until 1959; then the U.S. Army Reserve from 1961 until his retirement in 1972 as Major. In September 17, 1955, he and Betty Jean Reynolds were married in Little Rock, Arkansas. To the union one child was born. Bruce was a business manager at Everett-Stephens Ford in Fordyce until his retirement in 1990. He was a member of the Fourth Street Church of Christ in Fordyce, where he served as an elder, taught Bible classes and filled in preaching when needed. He served as an alderman for the City of Fordyce and the city planning and zoning commission for twelve years, and he was a member of the Masonic Lodge for fifty years. He served as chairman of the Dallas County Chapter of the American Red Cross, former member of Fordyce Jaycees and the American Legion. Bruce is preceded in death by his parents, William Acruman and Goldia Brown Acruman; and his wife, Betty Acruman on June 5, 2010. Surviving is his daughter Becky Taylor and husband James of Rockdale, TX; granddaughter Carisa Richter and husband Paul of Montgomery, TX; grandson Jared Davis and wife Chelsea of Midland, TX; step grandchildren Travis Taylor and wife Lynsey, Matt Taylor all of Rockdale, TX; five great grandchildren Keaton and Madison Richter, Eden Davis, Shelby and Caleb Taylor. Bruce enjoyed his family and friends, visiting with his grandchildren, great grandchildren and his neighbors. In lieu of flowers memorials may be giving to your favorite charity. Visitation will be Monday 12:00 pm until 1:00 pm at Benton Funeral Home in Fordyce. Funeral services will be at 1:00 pm at Benton Funeral Home with Brother Todd Easterling officiating. Burial will follow at Oakland Cemetery. To sign the online register visit www.bentonfuneralhome.net.

The family of William Bruce Acruman Jr. created this Life Tributes page to make it easy to share your memories.

Send flowers to the Acruman family.