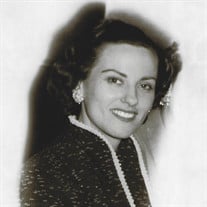 Velda Rose Anthony Walters of Tulsa, Oklahoma passed away on May 26, 2021. She was the last surviving child of Garland and Flora Anthony. Born on July 25, 1929 in Bearden, Arkansas, she was preceded in death by her husband, Mannon LaFayette Walters, her son, Lawrence Edward Walters, and ten brothers and sisters. Velda is survived by her sons, David Anthony Walters of Tulsa, Oklahoma, Mannon LaFayette Walters. Jr. of Evansville, Indiana, her grandson Matthew David Walters of Denver, Colorado and her daughter-in-law Pamela Walters of Euless, Texas. Velda Rose was a beautiful and gracious southern lady. She was a founding member of the Malvern, Arkansas chapter of the P.E.O (Philanthropic Educational Organization). Her generosity did not stop there. She and her husband were actively involved with many philanthropic causes. She donated generously to many ministries and faithfully tithed to her local church throughout her life. She learned generosity in the home of her parents. In the depth of the depression in the 1930s everyone for miles around knew they could receive a good meal at the Anthony home. Velda loved growing up in the country where she could fish and play with her siblings and cousins. She was a fabulous cook and baker including a long list of several family ‘favorites’ that she served during holidays and visits. She also learned to make authentic Mexican dishes when she lived in Mexico during the 1950s. Many of her recipes are included in several regional cookbooks. God gifted Velda with a beautiful, professional quality, alto singing voice. Her music teacher encouraged her to leave home to study voice with a world- renowned voice teacher in New York. Being shy and so close to her friends and family, she decided against that course for her life. One of her most cherished memories was singing with the Hot Springs Choral group. Often, she spoke of performing Handel’s Messiah. Velda continued to sing beautifully throughout her life and was still singing hymns and folk songs learned as a child, right up to her passing. Now, her voice is heard in the Heavenly choir. She will be greatly missed by her family and friends. Visitation will be at Benton Funeral Home in Fordyce, Arkansas on Wednesday, June 2nd from 6-8pm. Funeral services will be held at the funeral home, on Thursday, June 3rd at 2 pm. There will be no graveside service. She will be interred at Bethel Cemetery in Bearden, Arkansas. In lieu of flowers, the famly request donations to Feed the Children, 333 North Meridian, Oklahoma City, OK 73107. Arrangements by Benton Funeral Home Fordyce. To sign the online register visit www.bentonfuneralhome.net.

Velda Rose Anthony Walters of Tulsa, Oklahoma passed away on May 26, 2021. She was the last surviving child of Garland and Flora Anthony. Born on July 25, 1929 in Bearden, Arkansas, she was preceded in death by her husband, Mannon LaFayette... View Obituary & Service Information

The family of Velda Rose Anthony Walters created this Life Tributes page to make it easy to share your memories.

Velda Rose Anthony Walters of Tulsa, Oklahoma passed away on...

Send flowers to the Walters family.