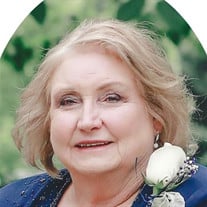 Not sure what to send?

Sheila Uyvonne (Cronin) Grissom, 74, of Bennett, Colorado, passed away on December 21, 2021 at University of Colorado Anschutz Medical Campus in Aurora, Colorado. Sheila was born February 28, 1947, in Warren, Arkansas, to Roy Sylvester Cronin and Ora Pauline Aycock Cronin. Sheila was the older sister to Brenda Cheryl and Royce Steven. She grew up in south central Arkansas, graduating from Hampton High School in 1965. She earned a B.A. in Elementary Education in 1970 at the Arkansas Agricultural and Mechanical College. In her sophomore year of college, Sheila met the love of her life, Jimmie Waldrum Grissom III, and they were married on June 3, 1967. While finishing their degrees, their first daughter Christy Carol was born. After college, Jim entered the Air Force, attending officer training school, became a pilot, and served in the Vietnam War. During this time, Sheila taught middle school history and reading. Later, Jim felt called to ministry, and resigned his military commission. Two weeks before they left for Jim to attend seminary, Valerie Michelle was born at Laughlin Air Force Base. In Chattanooga, Tennessee, during seminary, Joy Faith joined the family. Ministry later took them to Fowler, Colorado, where their son Jimmie Waldrum was born, and later, to Bennett, Colorado, where their daughter Sarah Elizabeth completed the family. All the while, Sheila supported Jim, her family, and their ministry. She continued teaching in the classroom, and she also loved teaching children at Bible Club and VBS at church. In addition to teaching, she enjoyed being a real estate agent. Sheila was known as an amazing cook and baker, who often facilitated large family, community, and church dinners. Sheila had many hobbies, including sewing, quilting, baking, gardening, and travel. Sheila was a cherished wife and adored mother. Her life work was alongside her husband in the church. She modeled dedication to God and service to others. Sheila and Jim were inseparable, always dreaming and doing things together. They were married 54 years. Together, they served in the pastorate of Bennett Baptist Church for 37 years. Sheila and Jim were blessed with eighteen grandchildren. Sheila loved her grandkids, and they will miss their “Grammy” dearly. Sheila is survived by her husband, Jim; children, Christy Moluf (Jon) of Richmond, Kentucky; Valerie Grissom (Ben) of Clinton, Washington; Joy Grissom (Jeremy) of Evergreen, Colorado; Jimmie Grissom IV (Jennifer) of Hudson, Florida; and Sarah Faulkner (Robert) of Henderson, Colorado; and grandchildren: Sigourney Herrman (Jake), Blaine Keller, Malora and Eamonn Moluf; Bjorn, Promise-Rose, Roryk, and Margreta Juengel; Asher Langrand; Jasmin, Travis, and Alana Spence, Kadence, Kaipre, and Sophie Grissom; and Robby and Viola Faulkner. Sheila was preceded in death by her parents Roy and Pauline Cronin; her sister Brenda Cronin; her brother-in-law Billy Grissom; and her granddaughter Sigrid Keller. A celebration of the life for Jim and Sheila Grissom will be held January 20, 2022, 1 PM, at Bennett Baptist Church by Love Funeral Homes. Graveside services will be January 24th, 1 PM, at McFarland Cemetery by Benton Funeral Home of Fordyce. In lieu of flowers, memorial contributions may be made to Samaritan’s Purse, PO Box 3000, Boone, NC 28607.

The family of Sheila Uyvonne Grissom created this Life Tributes page to make it easy to share your memories.