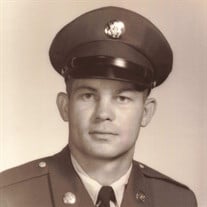 Sammy Lee Oliver was born in Hampton, AR on February 24, 1941 and died peacefully on Sunday, February 23, 2020 in Fordyce at the age of 78 surrounded by family. He graduated from Hampton High School and attended UAM in Monticello as biology major. He was a member of the Army Reserves and an expert rifleman. For 19 years, he worked in cardiovascular research and also ran the electron microscopy lab at UAMS in Little Rock. During that time, he and good friend Ron Tribble designed and patented a turkey caller that Sam used to win the National and World Turkey Calling Contests. After moving to Sheridan in the 1980s, he became owner of Poor Boy Feed for a number of years and then owner and president of Golden Eagle Promotions. In 1997, he moved back to Hampton, AR and not long after, became Sheriff of Calhoun County. Sam was an avid outdoorsman and loved deep-sea fishing, scuba diving, traveling, camping, and hunting with his family and friends. As a pilot, he was passionate about flying. He was known for his witty sense of humor and occasional pranks played on friends. As a captivating storyteller, he was skilled at keeping an audience's attention and often his stories held an underlying life lesson. He was also a 32nd degree freemason like his father and grandfathers before him. Sam was a member of First Baptist Church in Hampton. His favorite hymn was "On the Old Rugged Cross" and favorite verse was Romans 8:28. His last spoken words to his granddaughter, Cheyenne, were "I need to go to church because Jesus will take me home" and last words to his daughter were, "I'll be with her soon. It's not much longer. Love you too. Bye." He was preceded in death by his parents Walter "Pete" Enoch Oliver and Kathryn (Witherington) Oliver both of Hampton, AR; his wife of 24 years Darien Roberta Wallingsford of Hampton, AR, and infant sister Juanita Oliver. He is survived by daughter Lori Leigh Oliver Fawbush and husband Nathan of Sherwood, AR; 3 granddaughters Alyssa Cheyenne Fawbush, Savannah Leigh Fawbush, and Brooklyn Rose Fawbush; 2 sisters DeVellyn Oliver and Marigail Toney; 2 nieces Laura Staton and Paula Russell, and a nephew Walter Toney. In lieu of flowers, the family requests donations are made to St. John's Place of Arkansas for resident outings and activities in memory of Sam Oliver. Checks may be sent to St. Johns Place at 1400 Hwy 79/167 Bypass, Fordyce, AR 71742. Visitation will be Friday 1:00 pm until 2:00 pm at First Baptist Church in Hampton. Funeral services will be 2:00 pm Friday at First Baptist Church with Rev. Rickey Smith officiating. Burial will follow at Camp Ground Cemetery in Hampton. Arrangements by Benton Funeral Home of Fordyce. To sign the online register visit www.bentonfuneralhome.net.

Sammy Lee Oliver was born in Hampton, AR on February 24, 1941 and died peacefully on Sunday, February 23, 2020 in Fordyce at the age of 78 surrounded by family. He graduated from Hampton High School and attended UAM in Monticello as biology... View Obituary & Service Information

The family of Sammy Lee Oliver created this Life Tributes page to make it easy to share your memories.

Send flowers to the Oliver family.