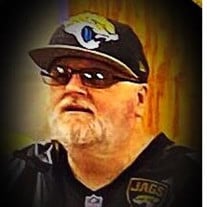 Roy Leon Henderson (Buster) was born on November 8th, 1961 to Betty Sue Dunn and Joe Dunn of Jacksonville Florida. Buster passed away late Friday night on June 5th, 2020, losing his two year battle with cancer. Buster is preceded in death by his father Joe Dunn, his paternal grandparents Joe & Maudelle Dunn, his maternal grandparents Roy & Geraldine Roderick, 3 Aunts: Kay Kay Sarman, Marilyn Volentine, Arlene Williams, and two Uncles: Norman & David Roderick. He is survived by his mother, Betty Sue Dunn & although he was an only child, he was born into an exceptionally big family, with his mother being the oldest of 14; he was raised alongside some of his aunts & uncles and definitely didn’t miss out on having that sibling feeling. He is also survived by his 7 Aunts, Beatrice, Leatrice, Sarah, Nancy, Donna, Darlene, & Barbara, his 3 Uncles Mike, Ronnie, & Bill, along with his 217 first, second, & third cousins. A big family but also a close family. Buster will be greatly missed by everyone. Buster was a very passionate & loyal Jaguars fan. He was never seen without his Jaguars hat on & never left the house without his fan gear. He was in the stands for every single home game since the Jaguar’s 1st year in Jacksonville. His Memorial Service will be held at a later date due the social gathering guidelines in Arkansas.. Arrangements are by Benton Funeral Home of Fordyce

The family of Roy Leon ( Buster) Henderson created this Life Tributes page to make it easy to share your memories.

Send flowers to the Henderson family.