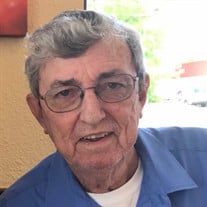 Ronald Edward Smead, 77 of Kingsland died Friday June 14, 2019. Born October 24, 1941 at Harrell, he was a son of the late Claud Duvall Smead and Jetta Vivian Brown Smead. He served in the Air Force, Army, and National Guard and was a retired... View Obituary & Service Information

The family of Ronald Edward Smead created this Life Tributes page to make it easy to share your memories.

Send flowers to the Smead family.