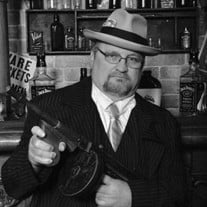 Ricky Dwayne Crouse, age 59 of Kingsland died Thursday, April 23, 2020 at his home. He was born February 11, 1961 in Fordyce, Arkansas. He was a saw filer. He is preceded in death by his father, Billy O. Crouse; son, Matt Spencer; and grandparents,... View Obituary & Service Information

The family of Ricky Dwayne Crouse created this Life Tributes page to make it easy to share your memories.

Send flowers to the Crouse family.