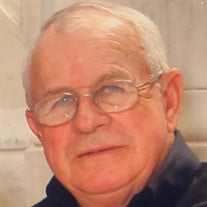 Quinton David Ledbetter, 76, of Fordyce died Thursday March 4, 2021 at Baptist Medical Center in Little Rock. Born November 6, 1944 at Botkinburg, AR, he was a son of the late Clarence Ruel Ledbetter and Elma Gertrude Emerson Ledbetter. He was the owner and operator of Ledbetter Construction. Accomplished in business, he knew the true meaning of success was the love he had for his wife and family. He had a passion for gospel music. His beautiful tenor voice could be heard leading the church in song. He played many instruments. Year ago, it would be no surprise to catch him playing the upright bass with his friends or a tuba in the National Guard Band. He was preceded in death by his parents; a brother, Ruel Ledbetter; and a sister, Maxine Shuffield. He is survived by his wife, Dianne Shrum Ledbetter of Fordyce, son, David Ledbetter and his wife, Cari of Fordyce; two daughters, Rochelle Ledbetter of Little rock and Kim Ledbetter of Little Rock; two brothers, John Ledbetter of Kimberly, ID and Ben Ledbetter of Twin Falls, ID; a sister, Alice Ticer and husband, Glen of Harrison; seven grandchildren, Tyler Ledbetter of Dewey, OK, Quinton Ledbetter of Hot Springs, Zoe Ledbetter of Fordyce, Bailey Brandon of Little Rock, Bethany Burton, Brodie Nance and Pete Nance of Fordyce; three great-grandchildren, Liam Ledbetter, Avery Ledbetter, and Kason Ledbetter. The family will receive friends Sunday from 6:00 p.m. to 8:00 p.m. at Benton Funeral Home in Fordyce. Funeral services will be 1:00 p.m. Monday at the Benton Funeral Home Chapel. Burial will follow at Stoney Point Cemetery. In lieu of flowers, memorials may be made to CARTI Foundation at CARTI.com or PO Box 55011, Little Rock, AR 72215. Arrangements are by Benton Funeral Home of Fordyce. To sign the online register visit www.bentonfuneralhome.net.

The family of Quinton David Ledbetter created this Life Tributes page to make it easy to share your memories.

Send flowers to the Ledbetter family.