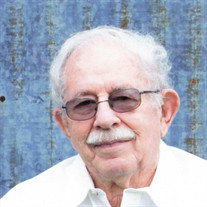 On Saturday June 26, 2021, Norman August Klappenbach, loving husband, father, and Papa passed away at the age of 89. Norman was born December 24, 1931 in Wadena, MN to the late August William Klappenbach and Anna Marie Becker Klappenbach. He started his lifelong baking career as an apprentice at the age of 14. After graduating from High School at Lewiston, ID, he enlisted in the Air Force, married Agnes Lee Barker from Kingsland, AR, and served as a baker at Lackland Air Force Base in San Antonio,TX. He served for four years and after discharge continued his career by attending Dunwoody Institute in Minneapolis, MN and then working for Albertsons in Washington State. Norman and Lee purchased the Cottage Bakery in Walla Walla, WA in 1964 and then moved the bakery to Fordyce, AR in 1975. Through the years, Klappenbach Bakery became well known throughout the state and then nationwide when they began to ship their bakery items. Norman won multiple awards throughout his career. He was loved by many and his love for his family was always felt. He was preceded in death by his parents, four brothers and five sisters. He is survived by three sons, Mark (Glenda) Klappenbach, Tim (Heidi) Klappenbach and Paul Klappenbach; five grandchildren, Anna Klappenbach, Karl Klappenbach, Aaron Klappenbach, Zack Klappenbach and Kristin Klappenbach. The family will receive friends Tuesday from 6:00 p.m. to 8:00 p.m. at Benton Funeral Home in Fordyce. Funeral services will be 2:00 p.m. Wednesday June 30, 2021 at the Benton Funeral Home Chapel with Rev. Rusty Ross officiating. Burial will follow at Kingsland Cemetery. Arrangements are by Benton Funeral Home of Fordyce. To sign the online register visit www.bentonfuneralhome.net.

On Saturday June 26, 2021, Norman August Klappenbach, loving husband, father, and Papa passed away at the age of 89. Norman was born December 24, 1931 in Wadena, MN to the late August William Klappenbach and Anna Marie Becker Klappenbach. He... View Obituary & Service Information

The family of Norman August Klappenbach created this Life Tributes page to make it easy to share your memories.

Send flowers to the Klappenbach family.