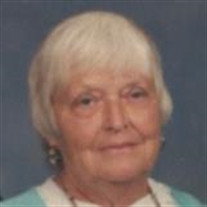 Mary Francis Watts-Dunn passed away Tuesday, February 5, 2019 at the age of 97. She was born in Drew County just outside of Monticello, Arkansas on May 29, 1921. She was one of four children born to Arthur and Verlee Watts of Monticello, Arkansas. Francis attended Monticello schools and graduated from Arkansas A&M College (now UA Monticello). During World War II she worked in the Jacksonville Ordinance Plant where she was a shift supervisor. She started her teaching career in a one room school house teaching grades 1 thru 12. In 1947, she moved to Hampton, Arkansas to teach elementary school. There she taught for over thirty years, eventually teaching students who later became parents of her students. On December 10, 1949, she married Ira Vernon “Red” Dunn. He affectionally called her “Squaw.” Their marriage lasted 68 years until he died in March 2018. Survivors are her grandson, Douglas Blann; sisters-in-law, Louise Silen, Ida Johnson, Betty Jane Dunn; brothers-in-law Carroll Dunn and William Dunn. Also, many nieces, nephews, great nieces, great nephews, great, great nieces and great, great nephews. She was predeceased by her parents; her siblings, Mildred, Helen, and Lamar; her husband, her daughter Cheryl Dunn and grandson Brian Blann. Visitation will be Thursday, February 7, 2019 from 6 to 8 pm at Benton Funeral Home in Hampton, Arkansas. Funeral will be 1 PM Friday, February 8, 2019 at Faustina Methodist Church on W 278 HWY in Hampton, Arkansas. To sign the online register visit www.bentonfuneralhome.net .

The family of Mary Francis Dunn created this Life Tributes page to make it easy to share your memories.

Send flowers to the Dunn family.