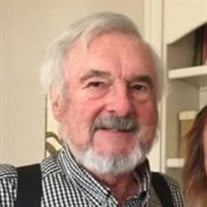 Lundy Ray Colvert, age 80 of Garfield, died Sunday, October 25, 2020 at his home on Beaver Lake. He was born on November 24, 1939 at his home in Calhoun County to the late Annie Rae Colvert and Lundy Bass Colvert. Lundy Ray Colvert was a true Renaissance man, whose passions included God, family, love for his country, and love of hunting. Lundy grew up in Thornton, AR and attended Thornton high school. During his high school career, he was involved in school and local activities. He played for the high school basketball team, was president of the Beta Club, and was named the Arkansas Farmer of the Year. During this time, he was also very active in his church, serving as the Treasurer at Harmony Baptist Church. After high school, he joined the Navy and attended college at Southern State before transferring and graduating from the University of Arkansas in Fayetteville, where he earned a Bachelor degree in agricultural engineering. Lundy then attended flight school with the US Navy in Pensacola, where he graduated top of his class. As a reward, the Navy offered to fly him anywhere in the world, but he chose to fly to Little Rock, AR to meet his girlfriend. During a period of leave, he would later court and marry Bonnie Sue Crowder. Lundy then moved to one of his first duty stations in Point Mugu where he would lead a team of civilians and military personnel in developing a surface to air missile. Lundy’s achievements and responsibilities spanned throughout his Navy career. As Squadron Commander, he would navigate his squadron on classified missions over eastern block countries, and then guide them back safely to land on aircraft carriers in the Mediterranean ocean. He also served as the nuclear weapons officer aboard an aircraft carrier, completed meteorology school, and worked as a meteorologist. He was the number one naval officer recruiter in the nation out of Little Rock, Arkansas where he would complete his Navy career as Lieutenant Commander. After this, his civilian career included becoming a real estate agent, broker, and eventually started his own business as a builder and developer. Simultaneously, he became a rancher and cattle farmer. He was a real “do it yourself” kind of man who built a 6,000 sqft cabin (twice) on the Little Red River, while living in a camper in the wilderness around Pangburn, AR. Here, he would entertain his greatest joy: inviting his entire family over for any and all occasions. Lundy's greatest loves were his relationship with the Lord, his country, and his family, who he dedicated himself to tirelessly. He was a giver, he was a helper, and he always shared great advice. Lundy is preceded in death by his parents, Annie Rae Colvert and Lundy Bass Colvert. He is survived by his sister, Frances Jewel Black and her husband Charles Steven Black of Little Rock, one daughter, Lisa Rae Jenkins of Conway, and one son, Dr. Lundy Wade Colvert of Eureka Springs. He is also survived by grandchildren Dr. Mitchell Bruce Jenkins, Dr. Timothy Drake Jenkins, and Tristan Rae Jenkins. Other survivors include; nephew Christopher Steven Black and wife Kristy Lee Black with their two children, Anna Kathryn Black and Jewelia Lee Black as well as niece Cindy Ann Thompson and her two daughters, Mollee Anne Thompson and Maely Grace Thompson. Visitation will be Thursday from 1:00 p.m. to 2:00 p.m. at Benton Funeral Home in Fordyce. Funeral services will be 2:00 p.m. at Benton Funeral Home with Brother Matt McManus officiating. Burial will follow at Calaway Cemetery near Thornton. In lieu of flowers, memorials may be made to Harmony Baptist Church C/O Shirley York, Calhoun 68, Thornton, AR 71766. Arrangements are by Benton Funeral Home of Fordyce. To sign the online register visit www.bentonfuneralhome.net

Lundy Ray Colvert, age 80 of Garfield, died Sunday, October 25, 2020 at his home on Beaver Lake. He was born on November 24, 1939 at his home in Calhoun County to the late Annie Rae Colvert and Lundy Bass Colvert. Lundy Ray Colvert was a... View Obituary & Service Information

The family of Lundy Ray Colvert created this Life Tributes page to make it easy to share your memories.

Send flowers to the Colvert family.