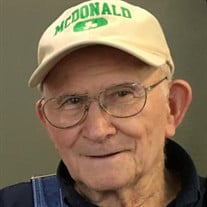 Lon Garfield McDonald, Jr., age 93, passed away peacefully on March 11, 2021 at The Gables in Rolling Meadows, Wichita Falls, TX. Lon was a former resident of Fordyce, AR for 54 years. He was born on April, 23, 1927 in Thornton, Arkansas, the son of the late Lonnie Garfield McDonald and Virginia Hodge McDonald. Lon was a retired truck driver of over 50 years. He started at a young age in the logging industry before driving 36 years for Arkansas Best Freight and 15 years for Raney & Sons. He was known to be a gentle and soft spoken man, who chose his words with care. One of 11 children, he learned early on the value of family and a hard day’s work. He instilled the same character, values and ethics in his children. He was renowned for his skill in CB radio repair, which he turned into a part time business for 30 years. He was also a licensed Ham radio operator. Known by his handle Flash, he made many friends from around the nation. Lon was a humble and devoted member of the Fordyce community. He was a member of Beech Grove Missionary Baptist Church for 56 years. He was a 32nd Degree Mason and 50 year member of the Order of the Eastern Star, Barnett Chapter. He was preceded in death by his son, Arthur Lon McDonald; parents Lonnie and Virginia McDonald; three brothers, Charles, Lawrence, and Dale McDonald; six sisters, Opal Burford, Mina Looney, Geneva Boston, Maurine Jones, Sue McDonald, and Martha Lephiew; and great granddaughter, Abigail Lahnan. He is survived by his wife of 62 years, Helen Erwin McDonald; son David McDonald (Shirley) of Conway, AR; daughters, Mary Catherine Stewart (Kiven) of Maumelle, Debi Faulk (Lynn) of Eros, LA, and Peggy Mathews (Sonny) of Wichita Falls, TX; nine grandchildren, 13 great grandchildren and one sister, Nona Montgomery of Bryant, AR. The family would like to extend special thanks to Dr. Tom Talbert and nursing staff of Hospice of Wichita Falls and The Gables for providing exceptional care during the past year. Memorials may be made by mail or online to Hospice of Wichita Falls, 4909 Johnson Rd., Wichita Falls, TX 76310 https://www.howf.org/donate/. The family has chosen a private burial. Arrangements are by Benton Funeral Home of Fordyce.

Lon Garfield McDonald, Jr., age 93, passed away peacefully on March 11, 2021 at The Gables in Rolling Meadows, Wichita Falls, TX. Lon was a former resident of Fordyce, AR for 54 years. He was born on April, 23, 1927 in Thornton, Arkansas, the... View Obituary & Service Information

The family of Lon Garfield McDonald created this Life Tributes page to make it easy to share your memories.

Send flowers to the McDonald family.