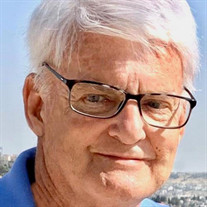 Leonard (Lynn) Hayes Horton, 72, of Hot Springs, Arkansas, formerly of Fordyce, AR, made his way to the Lord, Saturday April 4th, 2020. Lynn was born in Savannah, GA, and was raised in Magnolia, AR. Lynn attended Magnolia High School, Southern Arkansas University, and served his country by joining the Army National Guard during the Vietnam War. During his time at SAU, he met his future wife, Janet Arnette. They had been married for 49 years and 4 months at the time of Lynn’s passing. Lynn and Janet worked in the family business together, Hickey’s Clothing, in Fordyce for 35 years. He was an active member of the Downtown Merchant Association and of the Fordyce Chamber of Commerce where he served a term as president. Lynn enjoyed golf, fishing, and tennis, but more than anything in life, Lynn loved the time he spent with his family. Notorious for always bearing gifts, his grandchildren doted over “Pops” arrival nearly as much as he doted over them. Quiet and compassionate, humble and kind, Lynn Horton’s selfless nature was a model of Christian life. His early and teen years were spent as a member of Central Baptist Church, Magnolia. Most of his adult life he was an active member of First Baptist Church, Fordyce, and most recently, he and Janet found their new church home at First Baptist Church of Hot Springs. He is preceded in death by his parents Leonard and Mildred Luck Horton and brother Jim Horton. He is survived by his best friend and wife Janet Horton of Hot Springs, his two children, Tiffany Horton Estes (husband David) and Stephen Horton (wife Tori), and his four beloved grandchildren Aidan and Elijah Estes, Molly and Mila Horton, all of Little Rock. He also leaves behind his sister Rosemary Griffin (husband Rodney) of Magnolia, sisters-in-law Ann Lindsey (husband James) of Hot Springs, Pat Horton of New Mexico, numerous nieces, nephews, cousins, and other loved ones that were very dear to him. In addition to family, he had many old and new friends who have been such a valued part of his life. Lynn’s family and friends will never forget his tall tales, practical jokes, and quick wit. He was one-of-a-kind and will be greatly missed by everyone lucky enough to know him. Unfortunately, we are unable to hold a memorial service at this time. There will be a celebration of Lynn’s life scheduled at a later date. In Lieu of flowers, memorials may be made to your local church or favorite charity. Arrangements made by Benton Funeral Home of Fordyce. To sign the online register visit www.bentonfuneralhome.net.

The family of Leonard (Lynn) Horton created this Life Tributes page to make it easy to share your memories.

Send flowers to the Horton family.