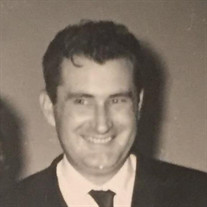 Leo Clifford Parker, age 87, went to be with his Lord and Savior, Jesus Christ, Monday, February 1, 2021 at the Medical Center of South Arkansas. Leo was born March 14, 1933 in Harrell, AR to Ellis and Mary Thompson Parker of Harrell, AR. He graduated Harrell High School in 1951. He served in the United States Army during the Korean War from 1953 to 1955. He worked at International Paper Company, Bag-Pak Division for 38 years. He was married to Marjorie Ann Mulligan Parker for 59 years. Leo was a member of Union Grove Assembly of God Church. He was preceded in death by his parents, Ellis and Mary Thompson Parker, one brother, Myrle Parker, one sister Betty Dean Armer, and one great grandchild, Benjamin Jett Hannegan. He is survived by his loving wife of 59 years, Marjorie Ann Mulligan Parker, two daughters, Diane Parker, and Carol Thomas (Corey). One brother, Brady Parker (Betty). Two grandsons, Brandon (Bubba) Hannegan (Kodie) and Brad Hannegan (Tabatha). Four great grandchildren, Jacob Hannegan, Jax Hannegan, Kelsey Hawkins (Jesse), and Kendal Duff. Two great-great grandchildren, Blaikley and Emmett, and several nieces and nephews. The family would like to extend a special thank you to Dr. Smart, Casey Wilson APRN, the staff of Timberlane Health & Rehab, and the nurses at MCSA, all of El Dorado, AR. Leo loved to spend his spare time hunting and fishing. He enjoyed his squirrel dogs and loved spending his vacation weeks taking his wife and daughters fishing whether they liked it or not. He also loved watching his westerns on TV and his wife’s good cooking, especially her homemade chocolate pudding and chicken and dressing. His family will greatly miss him. Graveside services will be 2PM Friday at Union Grove Cemetery near Hampton. The family will receive friends from 1:30PM until service time at the cemetery. Arrangements are by Benton Funeral Home of Hampton. To sign the online register visit www.bentonfuneralhome.net .

Leo Clifford Parker, age 87, went to be with his Lord and Savior, Jesus Christ, Monday, February 1, 2021 at the Medical Center of South Arkansas. Leo was born March 14, 1933 in Harrell, AR to Ellis and Mary Thompson Parker of Harrell, AR.... View Obituary & Service Information

The family of Leo Clifford Parker created this Life Tributes page to make it easy to share your memories.

Leo Clifford Parker, age 87, went to be with his Lord and Savior,...

Send flowers to the Parker family.