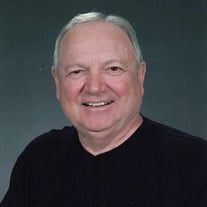 Lawrence Edgar Gill, age 83, of Fordyce, went home to be with his Lord and Savior on May 22, 2021, after a seven-year battle with cancer. Lawrence was married to the love of his life, Connie Mathews Gill, for sixty-four years and was the loving father of his three daughters, Tami, Laura Gay and Kim. In Fordyce, Arkansas, Lawrence was born July 3, 1937, to the late Versa & Edgar Harris Gill. He was preceded in death by his parents and older siblings, Paul, Fred, Roy Warren Gill, Ruby Moore, Agnes Dean, and Georgia Rogers. Lawrence was a prominent merchant and businessman for over fifty years in downtown Fordyce, a board member of the Chamber of Commerce, and a member of the Retail Merchants Association. He served nine years as a medic in the Arkansas National Guard. Lawrence was an avid golfer and recipient of "Key to the City of Fordyce, AR" for being a co-founder of the first annual Pine Belt 4-Ball Golf Tournament and served several terms on the board of Fordyce Country Club. Survivors include his wife, Connie Mathews Gill, three daughters Tami Gill Schaffner of Sarasota, FL (Dr. Dan Schaffner); Laura Gay Gill Black of Rogers, (Dr. Mark Black); Kim Gill-Lindsey of Hot Springs, (Danny Lindsey). He was dearly loved and looked up to by his sons-in-law. Surviving grandchildren are Jacob Daniel Schaffner of Monroe, LA, Dr. Matthew Gill Schaffner of San Diego, CA, Daniel Lawrence Schaffner of Little Rock, Morgan Black Lomax of Fayetteville, Anne-Ashley Black Hull of Fayetteville, Julia Peyton Black of Rogers, Brooke Anne Digby of Benton, Stephanie Jessica Newton of Fordyce. Great-grandchildren include Brayden Lee Newton, Blair Mackenzie Newton, Walker Grey Digby, Bryce Anne Lomax, and Brooks Patton Lomax. Lawrence always said, "Nothing is more important to me than faith and family." Funeral services will 2PM Tuesday at Benton Funeral Home in Fordyce with Rev. Rusty Ross officiating. Burial will follow at Stoney Point Cemetery near Fordyce. Arrangements by Benton Funeral Home of Fordyce/Hampton. To sign the online register visit www.bentonfuneralhome.net .

Lawrence Edgar Gill, age 83, of Fordyce, went home to be with his Lord and Savior on May 22, 2021, after a seven-year battle with cancer. Lawrence was married to the love of his life, Connie Mathews Gill, for sixty-four years and was the loving... View Obituary & Service Information

The family of Lawrence Edgar Gill created this Life Tributes page to make it easy to share your memories.

Lawrence Edgar Gill, age 83, of Fordyce, went home to be with...

Send flowers to the Gill family.