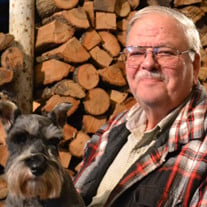 Larry Wilson Roark, 74, of Fordyce, Arkansas, and his beloved schnauzer best friend, Dexter, both passed away November 20, 2018 in his cabin, that he called his “heaven on earth” at Tri-County lake just outside Fordyce. He was born to the late I.W. “Pete” and Eula Roark on March 2, 1944 in Warren, Arkansas. Larry spent his childhood in Warren, AR and on the Saline River near Moore’s Mill. In 1958 he moved to Fordyce, AR where he met his future wife, Westy (Wynne), for the first time. At 14, he earned the rank of Eagle Scout, making him one of the youngest to ever do so in Arkansas. Upon graduating from Fordyce High School in 1962, where he was a member of the Redbug Band and president of the senior class, Larry enrolled in the University of Arkansas at Fayetteville, where he played trombone in the Hog-Wild Band and was a member of the Sigma Phi Epsilon fraternity. At a time when the nation was drafting men all around the country for the war in Vietnam, Larry chose to proactively enlist in the US Marines rather than wait for his draft number to be called. Before he was to be shipped out to Vietnam, he drove to Dallas, Texas in order to pick up his first love, Westy, and the two eloped to Poteau, Oklahoma and were married on September 3, 1964. Shortly after, he spent the next 18 months in Vietnam as Lance Corporal of the 3rd Marine division, 9th transport battalion stationed in Dong Ha. Upon his return from Vietnam, Larry joined his father in the family business in Fordyce, Ace Hardware, and later was appointed as the 13th Judicial District Juvenile Probation officer. Larry also served as president of the Chamber of Commerce, as an Elder in the Presbyterian Church (and later a member of Fordyce First United Methodist), a scout leader, and 25-year veteran of the Fordyce Fire Department, and thirty-second degree mason. A larger than life character, he found a friend in everyone he encountered and was often heard bragging of being the last man in Arkansas to legally wrestle a bear…and survive! Larry is preceded in death by his parents I. W. “Pete” and Eula Roark. He is survived by his wife of 54 years, Westy Wynne Roark; four kids and nine grandchildren: Rynne Roark of Fordyce and her son Christian, Robin Roark and his wife, Amanda, of White Hall (Reid, Bryce, Reese, Brock), Ryan Roark and his wife Wendy, of Fayetteville, Arkansas (Ryan Thomas and Ryleigh Starr) and Ramy Roark Zimmerebner and her husband Daniel, of Little Rock, Arkansas (Stecks and Julie Wynne). He is also survived by his brother I. B. “Benny” Roark and his wife Sherry of Fordyce, sister Nancy Newcomb and her husband Robert of Little Rock and a host of other family and friends. For those who know who they are, the codeword is “Bismarck” and the operation is a go. Service will be held 3:00 p.m. Sunday, December 2 at the Fordyce First United Methodist Church. Memorials may be made to the Fordyce Volunteer Fire Department or the Dallas County Museum. Arrangements are by Benton Funeral Home of Fordyce. To sign the online register visit www.bentonfuneralhome.net.

Larry Wilson Roark, 74, of Fordyce, Arkansas, and his beloved schnauzer best friend, Dexter, both passed away November 20, 2018 in his cabin, that he called his &#8220;heaven on earth&#8221; at Tri-County lake just outside Fordyce. He was born... View Obituary & Service Information

The family of Larry Wilson Roark created this Life Tributes page to make it easy to share your memories.

Larry Wilson Roark, 74, of Fordyce, Arkansas, and his beloved...

Send flowers to the Roark family.