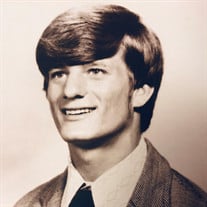 Larry Dale Greenfield, 63, of Camden Arkansas, went to be with the Lord on December 26, 2018. Larry was born in Mulberry on February 5, 1955. He graduated from Alma High School and continued on to serve his country in the United States Air Force. He was stationed in Anchorage, Alaska for the first two years and then finished out at LRAFB. Larry married his wife Karen on March 6, 1976; they were married 42 years. Larry worked as a Letter Carrier for USPS in Camden for 40+ years. He enjoyed refereeing football for over 25 years, he loved participating in all sports but his favorite was golf. He enjoyed the competition and when beaten he was known to say “Good job ya crook“. He won numerous golf tournaments and was still active in the Golf Week Amateur Tour. Larry had a huge heart, he was constantly helping others. He was known for his generosity and always had a smile on his face. Larry gave his heart and soul to our Lord Jesus at a young age, he continued serving Christ and sharing his faith throughout his life. He served as a deacon for many years. Larry enjoyed spending time with his family especially his grandchildren as they were the light of his life. Larry is survived by his wife Karen, one son Eric of Camden AR, one daughter Kimberly Clemens and husband Todd, grandchildren Cassie and Brent Clemens of Thornton AR. Three sisters Pam Keeling and husband Thomas of St Joe AR, Janet Jamieson and Husband John of Enid OK, Mary Sims and Husband Mike of Cabot AR, and one brother Keith Greenfield and Wife Asenette of Hot Springs AR and many nieces and nephews and friends. Larry is preceded in death by his parents Bobby Joe and Janie Greenfield, one brother Ronald (Ron) Greenfield, one nephew Scott Keeling, and has his arms wrapped tight around his grandson Jayden Micah Clemens. The funeral service will be held at 2pm at Hillside Baptist Church. Shane Russell of Hillside Baptist Church will be officiating. Funeral arrangements are being handled by Benton Funeral Home in Fordyce Arkansas. To sign the online register visit www.bentonfuneralhome.net .

Larry Dale Greenfield, 63, of Camden Arkansas, went to be with the Lord on December 26, 2018. Larry was born in Mulberry on February 5, 1955. He graduated from Alma High School and continued on to serve his country in the United States Air... View Obituary & Service Information

The family of Larry Dale Greenfield created this Life Tributes page to make it easy to share your memories.

Larry Dale Greenfield, 63, of Camden Arkansas, went to be with...

Send flowers to the Greenfield family.