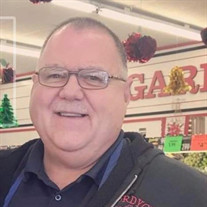 Jon Stanley “Stan” Jones was born on July 13, 1960 to the late Charles H. Jones and Imogene Standridge Jones in Sacramento, CA. He met the love of his life at Victory Baptist Camp and they married the next year, July 10 1982, knowing they were who God intended for each other. Stan began working at Mad Butcher in 1976 and other than a few years as the “Guy’s Potato Chip man” he spent the remainder of his days as the Produce Manager at Mad Butcher. He loved his job and always felt that was where God wanted him to serve. Stan enjoyed getting to pray with and minister to those he worked with. In 2012, God called him to shepherd the people at Bethesda Baptist Church. Under God’s leadership, the church grew from an attendance of 8 in 2012 to nearly 30 currently. He loved pastoring, preaching, and teaching God’s Word. Stan also recently received a certificate through Seminary Extension for Pastoral Studies. His greatest joy besides preaching was spending time with his grandkids and leading Church Camp, which he had done for countless years. Stan is survived by his wife of 38 years, Connie Jones of Fordyce, son Adam (Devin) Jones of Arkadelphia, daughter Ashley (Rushing) Mayes of Forney, Texas, and daughter Amber Ryan of Fordyce. Four grandchildren Landon Taylor of Fordyce, Elijah and Eisley Mayes of Forney, TX, and Jon Luke Ryan of Fordyce. Brothers Charles Jones of Sheridan, Tom Jones of Mablevale, Randy Jones of Dyer, sisters Charlotte Rushing of Calico Rock, Peggy Parker of Jonesboro, and Jan Townsend of Malvern, his favorite mother-in-law Jo Ann Franklin of Fordyce, and a host of cousins, nieces, nephews, friends, and coworkers. He will be missed by all but would want each one reading this to search their hearts and follow the Lord. In lieu of flowers, please make memorials to Spring Lake Baptist Camp where Stan served many years as Camp Director. Spring Lake Baptist Camp, PO BOX 195, Lonsdale, AR [email protected] 501-939-2393. Funeral services will be 2:00 pm Monday at First Baptist Church in Fordyce. Burial will follow at Mount Pleasant Cemetery near Hampton. Arrangements by Benton Funeral Home of Fordyce. To sign the online register visit www.bentonfuneralhome.net.

Jon Stanley &#8220;Stan&#8221; Jones was born on July 13, 1960 to the late Charles H. Jones and Imogene Standridge Jones in Sacramento, CA. He met the love of his life at Victory Baptist Camp and they married the next year, July 10 1982, knowing... View Obituary & Service Information

The family of Jon Stanley "Stan" Jones created this Life Tributes page to make it easy to share your memories.

Send flowers to the Jones family.