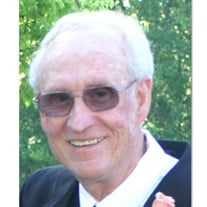 Joe Gordon Reaves, aged 76, of Tinsman passed to his heavenly home Thursday, January 31, 2019. He was born in Tinsman on September 3, 1942, to the late Gordon and Bedie Moore Reaves. He was preceded in death by his parents; a sister, Martha Lindsey; brothers-in-law, Jack Dempsey, Luke Avant, and Max Lindsey; and great granddaughter, Kenslee Riggs. He is survived by his loving wife of 53 years, Janie Dunn Reaves; daughters, Tracy (Mark) Samples of Benton and Joella (Kenny) Jackson of Tinsman; and son, Jason (Amy) Reaves of Bauxite. Also surviving him are grandchildren that he adored: Jacob Floss, Jessica Floss, Shelby Samples, Evan Reaves, Tiffany (Trey) Riggs, and Kolten Jackson; great grandchildren are Kailee Riggs, Jackson Riggs, and Ava Jackson. Also surviving him are two sisters, Billie Jean Avant and Pat (Edd) Dempsey both of Hampton along with many nieces, nephews, and cousins. Joe was a devoted and loving husband, daddy, grandfather, brother, uncle, and friend. He enjoyed gardening and shared his harvest with friends and neighbors. He also enjoyed camping, fishing, and hunting. A faithful member of Tinsman First Baptist church, he was a deacon, Sunday School teacher, building committee member during the construction of the church building in 1986 and parsonage in 2011, and served in any capacity that he could. There was no title involved but he took it upon himself to be the official “greeter” each church service. After graduating with a Bachelor of Science in Economics from UAM in Monticello, he began his 40 year teaching career at Thornton High School. Later he was elementary principal in Thornton for 10 years, before taking a position at Hampton Schools as a U.S. History teacher. After retiring from the secondary classroom, he and Janie finished their teaching careers with about 10 years as adult education instructors. Joe was avid in service to his county and community. He held various positions such as President of the Cattlemen’s Association, Vice-President of the Farm Bureau Board, President of the Calhoun County Retired Teachers’ Association, a charter member of the Tinsman Volunteer Fire District, and Secretary/Treasurer for Watson Cemetery Association. As President of the Calhoun County Rural Water Board, he was instrumental in getting water to rural communities in the county. He worked diligently to make sure that goal was accomplished. His family was honored to be the Calhoun County Farm Family of the year in 1996. Family visitation will be at Tinsman First Baptist Church in Tinsman from 6pm to 8pm on Sunday, February 3rd. Funeral service will be at the church on Monday, February 4th, at 2:00 pm with Bro. Buddy Burton, Bro. Kevin Dunn, and Bro. Chris Robbins officiating. Burial will follow at Watson Cemetery near Tinsman. Memorials may be made to Watson Cemetery Association, 7862 Calhoun 81, Hampton, AR 71744. Arrangements are by Benton Funeral Home in Fordyce. To sign the online register visit www.bentonfuneralhome.net.

Joe Gordon Reaves, aged 76, of Tinsman passed to his heavenly home Thursday, January 31, 2019. He was born in Tinsman on September 3, 1942, to the late Gordon and Bedie Moore Reaves. He was preceded in death by his parents; a sister, Martha... View Obituary & Service Information

The family of Joe Gordon Reaves created this Life Tributes page to make it easy to share your memories.

Joe Gordon Reaves, aged 76, of Tinsman passed to his heavenly...

Send flowers to the Reaves family.