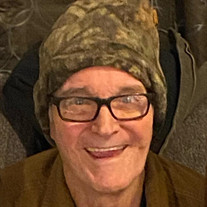 Jimmy Wayne Rogers, 78 of Carthage was born April 24, 1943 at Kingsland, AR to the late Roy Rogers, Sr. and Dorothy Wilson Rogers of Fordyce. Jimmy went home to be with his Lord and Savior on Tuesday October 12, 2021 at Baptist Medical Center in Little Rock with his precious granddaughter Brandi holding his hand by his side. As he stepped into glory a beautiful sunrise appeared through the window. Jimmy was of the Methodist faith and was a member of the Methodist Church of Carthage. Jimmy served his country in the National Guard with honor from February 1964 to February 1970. He received his education and graduated from Carthage High School. His work career consisted of Hobbs and Suttle of Sheridan, later working for C and S Lumber Company of Carthage, then on to H.G. Toler Lumber in Leola where he retired. Being outside is where he enjoyed being, fishing, hunting, 4 wheeler riding, or enjoying building crafts. Jimmy was also preceded in death by two brothers, Roy Rogers, Jr. and Jackie Rogers; and a grandson-in-law, Noble Emberton. He is survived by his wife, Joann Rogers of Sheridan; daughter, Leann Sallee of Sheridan, granddaughter, Brandi Emberton of Sheridan; great-granddaughter, Mariah Dimler of Sheridan; son, Curtis Culpepper of Tulip; sister, Frances Rogers Keeton of Fordyce; and two nieces. For years he had total enjoyment being with and playing with his precious granddaughter Brandi, later in life being the very one who walked Brandi down the aisle on her wedding day. When his great-granddaughter made her appearance into this world, a new generation for him to bond with, Mariah brought such joy in his later life. Graveside services will be 2:00 p.m. Thursday at Hampton Springs Cemetery with Rev. Rick Bolin officiating. Arrangements are by Benton Funeral Home of Fordyce. To sign the online register visit www.bentonfuneralhome.net.

Jimmy Wayne Rogers, 78 of Carthage was born April 24, 1943 at Kingsland, AR to the late Roy Rogers, Sr. and Dorothy Wilson Rogers of Fordyce. Jimmy went home to be with his Lord and Savior on Tuesday October 12, 2021 at Baptist Medical Center... View Obituary & Service Information

The family of Jimmy Rogers created this Life Tributes page to make it easy to share your memories.

Send flowers to the Rogers family.