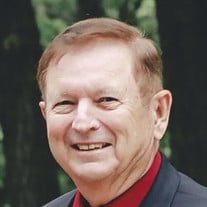 Not sure what to send?

Rev. Jimmie Waldrum Grissom III of Bennett, Colorado, passed away on December 31, 2021, at University of Colorado Anschutz Medical Campus in Aurora, Colorado. Jim was born June 7, 1946, in Houston, Texas, to Jimmie Waldrum Grissom, Jr. and Gladys Molly Jackson. He had two younger brothers: Patrick D. Grissom and William (Billy) E. Grissom. Jim earned a B.S. in Agriculture in 1970 at the Arkansas Agricultural and Mechanical College. Jim met Sheila Uyvonne Cronin, the love of his life, and wife of 54 years, in his sophomore year of college. Sheila described Jim as a “renegade student” with a dirt bike, playing electric guitar in a rock band. Initially, Jim planned to be a fertilizer salesman, but when he was drafted, he pursued his boyhood dream of becoming a pilot—attending officer’s training, and enlisting in the Air Force. He served in Vietnam as a B-52 pilot. Later, he described experiencing a call from God during one of his flights to become a pastor. In 1976, already a Captain and flight instructor for the Air Force, he retired from his commission and enrolled in seminary at Tennessee Temple University, in Chattanooga, Tennessee, where he earned a Master of Divinity. After seminary, he served as a pastor in churches in West Virginia, then Fowler, Colorado, and eventually Bennett, Colorado, where he served 37 years as the pastor of Bennett Baptist Church. Jim was a loving husband and an amazing Dad, and extremely dedicated to his family. He was known for his patient, calm manner, in all situations. His devilish grin, the twinkle in his eyes, and silly chuckle revealed his great sense of humor. He loved to laugh, especially with his wife Sheila, and his children, and he loved to play with his grandchildren, who were the apple of his eye. Jim also enjoyed music. He played the guitar, and made music whenever he could with his family, encouraging all his children and grandchildren to glorify God with their musical talents. Jim was also a beloved pastor. Throughout his ministry, he was known as a conversational, down-to-earth pastor who people, even absolute strangers, felt they could talk to. It was not uncommon to find Jim out sharing the gospel while helping people fix tractors, riding combines for harvest, and pulling calves. Throughout his life, Jim pointed people to a relationship with Jesus, as Savior, the only true source of peace. Jim and Sheila had five children: Christy Carol, Valerie Michelle, Joy Faith, Jimmie Waldrum IV, and Sarah Elizabeth. He was always there for his kids; even as adults, they always knew he was only a phone call away. Jim and Sheila also had 18 grandchildren. The grandchildren loved playing with Grandpa/Grandpappy, “driving” the tractor, sharing pieces of Grammy’s coconut cream pie together, fixing things with his tools, playing games with him, “helping” him play his guitar, going fishing, watching funny videos and cartoons snuggled up with him on the couch, and going with him to his favorite place, the beach. Jim is survived by his children, Christy Moluf (Jon) of Richmond, Kentucky; Valerie Grissom (Ben) of Clinton, Washington; Joy Grissom (Jeremy) of Evergreen, Colorado; Jimmie Grissom IV (Jennifer) of Hudson, Florida; and Sarah Faulkner (Robert) of Henderson, Colorado; and grandchildren: Sigourney Herrmann (Jake), Blaine Keller, Malora and Eamonn Moluf; Bjorn, Promise-Rose, Roryk, and Margreta Juengel; Asher Langrand; Jasmin, Travis, and Alana Spence, Kadence, Kaipre, and Sophie Grissom; and Robby and Viola Faulkner; as well as nieces and nephews. Jim was preceded in death by his wife Sheila Uyvonne (Cronin) Grissom, his parents Jimmie Waldrum Grissom, Jr., and Gladys Molly Grissom; his brother Billy Grissom; his sister-in-law Brenda Cronin; and his granddaughter Sigrid Keller. A celebration of the life for Jim and Sheila Grissom will be held January 20, 2022, 1 PM, at Bennett Baptist Church by Love Funeral Homes. Graveside services will be January 24th, 1 PM, at McFarland Cemetery by Benton Funeral Home of Fordyce. In lieu of flowers, memorial contributions may be made to Samaritan’s Purse, PO Box 3000, Boone, NC 28607.

The family of Rev. Jimmie Waldrum Grissom III created this Life Tributes page to make it easy to share your memories.