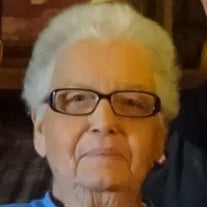 Jessie Ruth Morris, age 89 of Sparkman died Tuesday, July 27, 2021 at Alcoa Pines Health and Rehabilitation in Benton, Arkansas. She was born August 14, 1931 in Pine Grove, Arkansas. She is preceded in death by her parents, James Harrison... View Obituary & Service Information

The family of Jessie Ruth Morris created this Life Tributes page to make it easy to share your memories.

Send flowers to the Morris family.