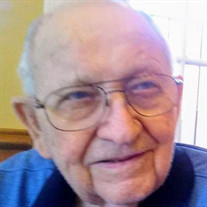 Jack Lonnie Lansdale, born January 16, 1925 in Fordyce Arkansas, died December 7, 2020 in Tucson, Arizona. Jack is preceded in death by his wife, Faye and a son, Thomas. He is survived by one son, Jack, Jr. (Nicki) and three grandsons, Jack III (Valerie), John (Lynn) and Troy (Nicole) and five great grandchildren. Another great grandchild is expected in January, 2021. Jack was born on a farm outside Fordyce, and he graduated from Fordyce High School in 1943. World War II was underway, and he enlisted and was accepted into the Army Air Corp Aviation Cadet Program. He completed the aviation cadet program and became a pilot of the P-51 Mustang fighter plane. He was honorably discharged as a First Lieutenant. Returning to Fordyce, he soon met and married Faye Bonner, who also was from Fordyce. Married in 1947, they stayed married until Faye passed away in 2008. Jack and Faye lived in Fordyce for several years, where Jack worked as a funeral director at the Benton Funeral Home. Jack and Faye moved to Phoenix, Arizona in 1953, where they lived until 2008. At that time they moved to Tucson, Arizona. Jack was employed at Merritt Electric, where he was a purchasing agent and later Vice President, until 1975. After that, he worked for the City of Phoenix until he retired in 1990. Jack was actively involved in numerous activities, including Masonry, where he attained 32nd degree, and the Shrine. He was a little league coach for years, and was an avid golfer. Whenever he could, he enjoyed hunting and fishing, and camping in his RV. There will be a graveside service on Thursday, December 17, 2020 at 11:00 a.m. at Oakland Cemetery in Fordyce. To sign the online register visit www.bentonfuneralhome.net .

Jack Lonnie Lansdale, born January 16, 1925 in Fordyce Arkansas, died December 7, 2020 in Tucson, Arizona. Jack is preceded in death by his wife, Faye and a son, Thomas. He is survived by one son, Jack, Jr. (Nicki) and three grandsons, Jack... View Obituary & Service Information

The family of Jack Lonnie Lansdale created this Life Tributes page to make it easy to share your memories.

Send flowers to the Lansdale family.