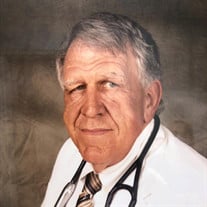 Fordyce lost a legend on Friday July 30, 2021 when Dr. Hugh Albert Nutt passed away at his home. Born June 16, 1943, at Fordyce, he was a son of the late Hugh Harrison Nutt and Kitty Corrine Robertson Nutt. He was a graduate of Fordyce High School and the University of Arkansas Medical School. He did his residency at John Peter Smith Hospital in Ft. Worth, TX and served as a flight surgeon in the US Navy. He came back to his hometown to practice medicine in 1974. Dr. Nutt was larger than life. He was always there for you, not just his friends but his patients as well. He worked hard and gave his life to Fordyce. He loved and he laughed. He tried to practice medicine to the very last, even when he didn’t feel like it. He would pat his chest over his heart and say, “It’s in here”. He practiced medicine for over 50 years, mostly in Fordyce and will be remembered and thought of fondly for many, many years. Dr. Nutt was a faithful member of Fordyce First United Methodist Church, where he served on several committees. He was a farmer on the side, raising cattle, chickens, hogs, and gardening. He also loved to golf and was a past president of the Fordyce Country Club. Dr. Nutt loved his Fordyce Redbugs and in his youth was the quarterback on some of Coach Red Parker’s best football teams, including the 1960 state champion Redbugs. He was upset when Fordyce won their most recent state championship and he could not attend because of the COVID-19 pandemic. Dr. Nutt loved the town of Fordyce as evidenced by the many community organizations he supported. He was a past member of the Fordyce School Board and a big supporter of the Annual Redbug Golf Tournament and the Redbug Foundation. He was also inducted into the Redbug Hall of Fame. Other than his parents, he was preceded in death by a brother, Rusty Nutt. He is survived by his wife, Karen Nutt of Fordyce; children, Benjamin M. Nutt, Col. U.S. Army Retired and his wife Karen of Hot Springs, Dr. Lindsey L. Nutt Walley of Fordyce, Albert B. Nutt and his wife Janay of Bella Vista, Cody Shankles and his wife Carrie of Fordyce; one brother, Bill Nutt and his wife Sue of Fordyce; six grandchildren, Jay Walley, Marion Nutt, Sarah Nutt, Tommy Hugh Nutt, Kinley Shankles, Carter Shankles. Funeral services will be private. In lieu of flowers, donations can be made to the Fordyce Redbug Foundation or the Fordyce First United Methodist Church. Arrangements are by Benton Funeral Home of Fordyce. To sign the online register visit www.bentonfuneralhome.net

Fordyce lost a legend on Friday July 30, 2021 when Dr. Hugh Albert Nutt passed away at his home. Born June 16, 1943, at Fordyce, he was a son of the late Hugh Harrison Nutt and Kitty Corrine Robertson Nutt. He was a graduate of Fordyce High... View Obituary & Service Information

The family of Dr. Hugh Albert Nutt created this Life Tributes page to make it easy to share your memories.

Send flowers to the Nutt family.