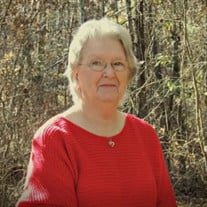 Hazel Clydean Lambert, 83, went to be with our Heavenly Father on March 9, 2021. Clydean was born on August 28, 1937 in Moyers, Oklahoma to the late Leslie B. and Jessie Osgood Wood. Clydean often spoke of wonderful childhood memories including moving to Arkansas while riding in the back of an old pickup truck on a mattress with her brother and three sisters, Chester Ray Wood, Ruby Faye Lambert, and Geraldine Rawls, who have also preceded her in death and surviving baby sister, Joyce Ledbetter. After moving to Arkansas, Clydean and her family settled in Wilmar, where she attended school and was the captain of the basketball team. In 1955 she met and married the love of her life, JR Lambert. They were married for 58 years and raised five children; Larry (Cindy) Lambert, Jerry (Mary) Lambert, Roger (Mitzi) Lambert, Karen (Todd) Rauls, and Judy (Johnny) Southall, all of Hampton. Jessie Ray went to be with his Heavenly Father in 2013. Clydean is also preceded in death by a grandson; Chaun Lambert, granddaughter; Loretta Lambert and one great grandchild; Grant Sartor. She is retired from Hampton Public Schools after 18 years and a retired homemaker. She spent most of her life caring for others. She enjoyed gospel and country music and rarely missed an episode of preacher Murry. Although her eyesight was failing her she enjoyed spending her afternoons on facebook where she tried to keep in touch with family and friends. She spent a big part of her life enjoying her grandkids; Larry Jr., Jason, Jessie, Gary, Kaci, Murry, Megan and Jake and great gradchildren; Olivea, Paisley, Karmen, Tyler, Cheyenne, Rhys, Ross, Kole, and Rylee that she loved dearly and she always had them some ice cream or another little treat. Clydean is also survived by a host of nieces and nephews.The grandchildren always enjoyed her telling stories on her childhood especially the ones where she was in trouble and laying down on the porch and looking through the crack and seeing a big ol’hog eye looking back at her that had gotten under the porch, or her and JR’s first date to the drive in picture show with her mom, dad, and sisters tagging along. Graveside services will be Friday, March 12, 2021 at 2 PM at Friendship cemetery with visitation starting at 1 PM. In lieu of flowers donations may be made to Lifetouch Hospice. Arrangements are by Benton Funeral Home of Fordyce. To sign the online register visit www.bentonfuneralhome.net

Hazel Clydean Lambert, 83, went to be with our Heavenly Father on March 9, 2021. Clydean was born on August 28, 1937 in Moyers, Oklahoma to the late Leslie B. and Jessie Osgood Wood. Clydean often spoke of wonderful childhood memories including... View Obituary & Service Information

The family of Hazel Clydean Lambert created this Life Tributes page to make it easy to share your memories.

Hazel Clydean Lambert, 83, went to be with our Heavenly Father...

Send flowers to the Lambert family.