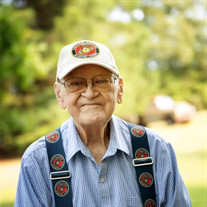 Haydn Martin (Hank) Welsh, age 89, of Hampton, Arkansas passed away on Thursday, January 20, 2022 at Life Touch Hospice in El Dorado, Arkansas. He was born on April 16, 1932 in York, Pennsylvania, a son of the late Harry M. and Edna Mae (Gohn) Welsh. Haydn is preceded in death by his loving wife of 41 years, Carolyn (Nettles) Welsh whom he married May 16, 1959. Also, preceded in death by two brothers Charles Welsh and Wallace Welsh; three sisters Rebecca Pierce, Donna Brisbane, and Phyllis Dacheux. He is survived by a son, Mark Anthony (Tony) Welsh of Austin, Texas; a daughter, Kelly Ann Ashcraft and spouse Jerry of Warren, Arkansas; two granddaughters Taylor Ashcraft of Monticello, Arkansas and Payton Ashcraft of Little Rock, Arkansas; a brother Donald Welsh of New Haven, Pennsylvania. He is further survived by longtime companion Judy Carter who filled the last twenty years of his life with love, laughter, and an extended family. Haydn was a proud Veteran who served his country in the United States Marine Corps and fought in the Korean War. The Marine Corps motto Semper Fi meaning “Always Faithful” to God, Country, Corps is something in which he strongly believed. Haydn was the owner and operator of Town and Country Superette also known as “Hank and Trav’s” until retirement. He was a talented butcher that drew customers from miles around to the store’s popular meat market. The trade he loved was brought full circle in recent years when he taught his meat market skills to a new generation at the Snap N’ Chop Butcher Shop in Hampton. Throughout his life he served the community of Hampton in many capacities. Haydn served as Vice Chairman on the Hampton Airport Commission and played an integral part in building the airport in Hampton during the late 1970’s. He was a licensed pilot with a love for aviation. He served on the Hampton School Board during the 1980’s. He was also a long-time serving Director of the Calhoun County Bank, now Generations Bank, Board of Directors until retirement. Visitation will be Tuesday, January 25, 2022 at Benton Funeral Home in Hampton from 6:00 pm until 8:00 p.m. Graveside funeral services will be at 2:00 p.m. on Wednesday, January 26, 2022 at Means Cemetery, Hampton, Arkansas. Memorials are preferred to a military Veteran’s charity of your choice or the National Pancreas Foundation (NPF) at www.pancreasfoundation.org to fund research for the cure of pancreatic cancer. Arrangements are by Benton Funeral Home of Hampton/Fordyce. To sign the online visit www.bentonfuneralhome.net.

The family of Haydn Martin Welsh created this Life Tributes page to make it easy to share your memories.

Send flowers to the Welsh family.