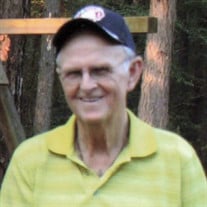 Gene Boyd Raney, 80 of Fordyce went home to be with his Lord and Savior Wednesday March 17, 2021 at Dallas County Medical Center in Fordyce. Born June 29, 1940 at Fordyce, he was the son of the late Garland E. Raney and Ida Mae Rice Raney. He was the first born of six siblings all who still reside in Fordyce. He worked with family his entire life in one fashion or another. He and his brothers helped in the family pulpwood business while still in high school and later became a part of Garland Raney and Sons Trucking. He eventually started his own trucking company. Even then he was closely tied to his family. He married Marjorie on April 25, 1959 and they made their home in Fordyce and raised their two sons there. He was known by many of his trucker friends as Chipmunk. He enjoyed the comradery of friends on the road as well as those at the Round Table and Red’s Restaurant. He just loved people. He attended Sulphur Springs Baptist Church for many years until his health prevented him from going. He enjoyed a close friendship with people there and especially the third Sunday Potluck fellowship. Love for his family and friends were a constant in his life. He will be greatly missed but we celebrate him to his heavenly home where there is no more pain and suffering, just happiness. He was preceded in death by his wife, Marjorie Raney, their daughter, Cathy Ann Raney, and both his parents. He is survived by two sons, Tracy Raney of Little Rock and Lance Raney of Fordyce; one granddaughter Roxanne Raney of Fordyce, three brothers W.A. Raney, Roger Raney, and Gary Raney and two sisters Vickey Smith and Patricia Files all of Fordyce, as well as a host of nieces, nephews and a host of friends. Funeral services will be 10:00 a.m. Saturday March 20 at Stoney Point Cemetery with visitation from 9:30 until service time. In lieu of flowers, donations may be made to UAMS Cancer Institute, American Cancer Society or your favorite charity. Arrangements are by Benton Funeral Home of Fordyce. To sign the online register visit www.bentonfunerlahome.net.

Gene Boyd Raney, 80 of Fordyce went home to be with his Lord and Savior Wednesday March 17, 2021 at Dallas County Medical Center in Fordyce. Born June 29, 1940 at Fordyce, he was the son of the late Garland E. Raney and Ida Mae Rice Raney. He... View Obituary & Service Information

The family of Gene Boyd Raney created this Life Tributes page to make it easy to share your memories.

Gene Boyd Raney, 80 of Fordyce went home to be with his Lord...

Send flowers to the Raney family.