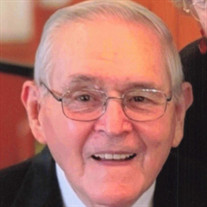 Elder Freddy Boen, age 83, of Fordyce died Saturday, October 30 in the Dallas County Medical Center. He was the Pastor of Mt. Paron Primitive Baptist Church. Freddy was born on April 10, 1938 in Rotan, TX to Elder Fred and Reva (Moffett) Boen. He is survived by his wife of 61 years, Ella Boen of Fordyce. One son, Ken Boen and wife Kimberly of Fordyce. Two daughters, Kathy Nall and husband Wayne of Cynthiana, IN; Kristy Frankell and husband Daniel of Camden, AR. One daughter-in-law, Martha Boen of Fordyce. 8 grandchildren, 11 great grandchildren and 3 great-great grandchildren. He was preceded in death by his parents, a son, Kevin Boen, a grandson, Zachary New, and a brother, Tommy Boen. Freddy Boen grew up on a cotton farm in west Texas. He joined the Primitive Baptist Church in Roby, TX in 1955 and was baptized by Elder Ben Howze. After high school, Freddy joined the United States Army and served his country for 3 years. During his Army service, he met and married Ella Walker of Excelsior Springs, MO. They served God together hand in hand for over 61 years. To this union was born 4 children. In 1968, Freddy was ordained to the full work of the Gospel Ministry. He faithfully served God as a minister for 53 years, preaching in churches, homes, nursing homes, and hospitals across the United States and in the Philippine Islands. He was the pastor of Mt. Paron Primitive Baptist Church for the last 14 years of his earthly life. Funeral Services will be held on Thursday, Nov 4 at 10:00 AM at the Benton Funeral Home Chapel in Fordyce, AR with visitation on Wednesday evening, Nov 3 from 5-7 PM. Elders Dub Hatten, Jeff Winfrey, Troy Barrington, and Joe Asbell will be officiating. Primitive Baptist Ministers will serve as pallbearers.

The family of Elder Freddy Boen created this Life Tributes page to make it easy to share your memories.

Send flowers to the Boen family.