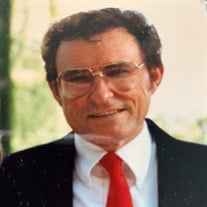 Elmer Lee Strickland, 79, of Seymour, TN, peacefully transitioned from this life into the arms of his departed family and His Savior on Wednesday, May 20, 2020 in Knoxville, TN. He was born on 11 November 1940 in Tinsman, Calhoun County, Arkansas to his parents, Jasper Lee Strickland and Sarah Malinda “Bitty” Raybon Strickland. He was raised in Arkansas and had a “32 and a half” year employment with Georgia-Pacific Corporation, in several areas of increasing responsibility, including plant superintendent at several locations, retiring from his career as a division Quality specialist in 1996. He married Sharon Maureen Rogers on 10 July 1964 in Tulip, Arkansas and they subsequently started their family in Fordyce, with son Tony arriving the next year in May. Terry was born in 1967 in Crossett, and Toby was born in Monroe, Louisiana in 1971. Elmer and his family moved around the southern states of Arkansas, Louisiana, and Mississippi during his career, settling in Crossett, Arkansas until 2002, when they retired in Seymour. His favorite hobbies were spending time with his family, playing guitar and performing, fishing, water skiing, and hunting. He was an active member of the Church of Jesus Christ of Latter-day Saints and had leadership assignments in the congregations where he and Sharon lived. Elmer is survived by his wife, Sharon; sons Tony (Lisa) of Lehi UT, Terry (Heather) of Atlanta GA, and Toby (AnneMarie) of Knoxville TN; 8 grandchildren; and 1 great grand-daughter; one brother Terrell of Little Rock, AR; and one sister Linda (Pennington) of Thornton, Arkansas; 2 nieces; 2 nephews; and numerous other family members. He was preceded in death by his parents. Funeral and transportation arrangements are by Atchley Funeral Home of Seymour. A private service for Elmer will be Monday, May 25th in Fordyce, Arkansas under the direction of Benton Funeral Home. Burial is open invitation at Campground Cemetery north of Hampton, Arkansas at 1:30pm. The family asks that gifts and donations be made to Campground Cemetery Fund, Attention: Leslie Pedigo, 2393 Calhoun 44, Hampton, AR 71744. Arrangements by Benton Funeral Home of Fordyce. To sign the online register visit www.bentonfuneralhome.net

Elmer Lee Strickland, 79, of Seymour, TN, peacefully transitioned from this life into the arms of his departed family and His Savior on Wednesday, May 20, 2020 in Knoxville, TN. He was born on 11 November 1940 in Tinsman, Calhoun County, Arkansas... View Obituary & Service Information

The family of Elmer Lee Strickland created this Life Tributes page to make it easy to share your memories.

Send flowers to the Strickland family.