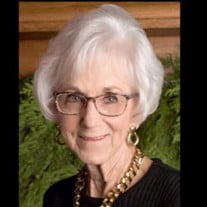 Elizabeth “Liz” Ann King, age 83 of Bearden died Sunday, March 13, 2022 at Baptist Medical Center in Little Rock, Arkansas. She was born October 14, 1938 in Bearden, Arkansas. Liz’s life began in rural Ouachita County in southern Arkansas. At an early age, her father noticed she had an interest and knack for playing on the church piano. After her father bought a piano for the home, Liz began taking piano lessons. After a few months, her music teacher told her father that he was wasting his money because Liz had a natural talent and reading music was not in her interest. Her father attempted music lessons two times before relenting to Liz’s natural skills. At the age of 11, Liz started playing for church congregations. Back in the day, rural churches would have “singings” on Saturday nights. Her dad, Ray Chambliss, would take her to the host churches where she would play their set of gospel songs for the congregation. Her dad would lead singing. They were quite the musical duet. Liz was the pianist at every church where she was a member for the last 57 years, including Diaz Baptist Church in Diaz, Arkansas and the First Baptist Church in Bearden. Liz attended elementary through her sophomore year in high school in Bearden, where she enjoyed playing on the high school basketball team. Liz met her husband of 68 years, Kenneth, while attending school in Bearden. As two young people in love, they eloped and married when Liz was a young 15 years. At 18, Liz became a mother, giving birth to Debbie in Macon, GA, while she and Kenneth lived in Warner Robbins, Georgia, where Kenneth was stationed at the Air Force base there. After leaving the Air Force, Kenneth and Liz traveled the country while Kenneth worked in missile defense construction. They had their 2nd child, Kerry, in Lincoln, NE and finally settled down to raise their family in Newport, AR. In 1962. Liz was a stay-at-home mom, always involved with her children’s schools and activities. She enjoyed athletics, playing on organized basketball and softball leagues. She was also a very good bowler while playing on local leagues in Newport. Liz became an avid outdoor sportsman after growing up in an outdoor sportsman family and marrying into the same environment. She and Kenneth raised their children to also love the outdoor sports. She loved to deer hunt and fish. Liz was known by her family as “the deer slayer” back in those days. She enjoyed loading-up her kids and taking them to a lake to fish for the day while Kenneth was at work. Mrs. Liz owned Liz’s National Fabrics, located in the old First National Bank building in downtown Newport, AR. She had a flair for design and fashion and a keen eye for detail. Her skills allowed her to assist ladies throughout the area in choosing fabric and patterns to make their own custom clothing. Liz made custom draperies for some of the nicest homes in Newport and surrounding areas. Mrs. King also became an integral part of Newport Whippets, Greyhound Cheerleaders, and surrounding cheer teams where she designed and monogrammed team uniforms. She helped mothers in designing and customizing homecoming court gowns and dresses. Liz was a fun-loving and light-hearted person with a sense of humor - always a joy to be around. She loved spending time with her girlfriends around the game table, on shopping trips, preparing meals for the football team, shut-ins, and well-deserved local community groups. Her Christian faith allows us to rest peacefully knowing that she is in the arms of our loving Father. We smile with joy when we imagine her playing the heavenly piano that will never go out of tune. Liz was loved by many and will be missed by all. She was a homemaker and a member of the First Southern Baptist Church in Bearden. She is preceded in death by her parents, Ray Chambliss and Lorine Evans Chambliss; two brothers, Jimmy Chambliss and Maurice Chambliss; and two sisters, Eloise Rowland and Linda Nutt. Liz is survived by her husband of sixty eight years, Kenneth King of Bearden; one son, Kerry King and wife Gayla of Grayslake, IL; one daughter, Deborah Downing and husband Blake of Tulsa, OK; three brothers, Rayburn Chambliss of Marion, Dickie Chambliss of Proctor, Mackie Chambliss of Nesbit, MS; three grandchildren, Josh Jones and wife Casey of Sapulpa, OK, Audra King and Carter King of Libertyville, IL; and one great grandchild, Bowie Jones of Sapulpa, OK. Visitation will be Wednesday 6:00 pm until 8:00 pm at Benton Funeral Home in Bearden. Funeral services will be 2:00 pm Thursday at First Southern Baptist Church in Bearden with Rev. Jimmy Owens officiating. Burial will follow at Salem Cemetery in Bearden. Arrangements by Benton Funeral Home. To sign the online register visit www.bentonfuneralhome.net.

The family of Elizabeth Ann King created this Life Tributes page to make it easy to share your memories.

Send flowers to the King family.