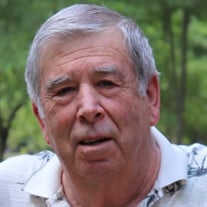 John Daniel Steger, our sweet Poppy, was a hero, superhero to his family, a big man, quiet in his own way, full of mischief and fun, but more serious with his love and dedication to his family. That love was strong, un-erring through good and bad, and always standing strong with support, loving each one. His love erupted more as his grandchildren and great-grandchildren were added. His heart was full with the success of his grands. He was a hard worker, never knowing how to slow down and always in high gear. His belief, stated many times to family and friends, “Always give them their money’s worth and never give less!” He was adamant about doing and giving his best. His wish for his family was always to know Jesus. Accept His word, believing and try to live life accordingly. Daniel was a private man with his faith and love for God, but never doubt, he had a love and faith that never waivered. Daniel was born in Fayetteville, TN on January 31, 1943, thus being 76 years of age at present. Born to Delmah and Jonnie Mac Steger, deceased. He is survived by his wife, Juanice Steger of their Thornton Home; children, Monica and Scott Chambers of Fordyce, Tanya and Mike Richardson of Star City. His PRIDE were his grandchildren, Blake “Buddy” and Kayla Richardson of Conway, Brooke “Twinkles” and Tate Stallnacker of Kingsland, Trevor “Trevor Bear” and Brittany Richardson of Star City, and Braden “Dobber” Chambers of Fordyce. His JOYS were his great-grandchildren, Adalyn, whom he called “Hey” for a special reason; as well as Aspen “Pretty Girl” Richardson, Avanley “Knuckle-Head/Baby Girl” Richardson (Knuckle-Head lovingly because of her daddy, Trevor) and a precious one we are waiting to arrive in February. Sisters, Cheryl Steger of Antioch, TN and Wanda Steger of Fayetteville, TN; and a host of loved ones so precious to him as brothers/sister by marriage and precious nieces and nephews and many-many friends. He was preceded in death by a brother Aubrey and two sisters, Evelyn and Sandy. A special thank you to Dr. Ryan Hall and staff and to his hospice nurses, Tara Culbreth and Tammy Owens. Visitation will be Monday evening from 6PM until 8PM at Benton Funeral Home in Fordyce. Graveside services will be 10AM Tuesday at New Hope Cemetery near Hampton. To sign the online register visit www.bentonfuneralhome.net. Memorials may be made to First Baptist Church of Fordyce and CARTI.

John Daniel Steger, our sweet Poppy, was a hero, superhero to his family, a big man, quiet in his own way, full of mischief and fun, but more serious with his love and dedication to his family. That love was strong, un-erring through good and... View Obituary & Service Information

The family of Daniel Steger created this Life Tributes page to make it easy to share your memories.

John Daniel Steger, our sweet Poppy, was a hero, superhero to...

Send flowers to the Steger family.