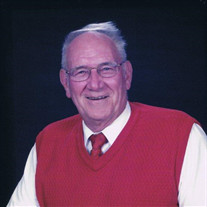 CLAYTON RUSSELL COCHRAN, 86, of Fordyce, went to be with his Lord and Savior on Sunday, November 11, 2018. His loving wife Jean was by his side. He had been a resident of St. John’s Place in Fordyce nearly five years. Clayton was born March 5, 1932, in Bearden, AR to Euna Bell Gray Cochran and Norman Sidney Cochran. He graduated from Bearden High School in 1950 where he enjoyed playing football and basketball for the Bears. On October 13, 1950, he married Jean Carolyn McMurry Cochran of Fordyce where they built a loving home for their two daughters. Clayton was a pillar of his community through his involvement in the Optimist Club International, and more importantly First Baptist Church where he was an ordained deacon, taught Sunday School, and joyfully sang in the adult choir for many years. His leadership and loving spirit continues to be evident in today’s adults who were children and youth at that time. A master carpenter by trade, Clayton was well known for his skill in several south Arkansas counties. His handiwork is present in hundreds of homes and businesses, including renovations of the A. B. Banks Building, the Dallas County Courthouse and Prosperity Baptist Church in Ramsey. He was also happy to use his carpentry skills over the years for many projects at his church. Clayton was the primary architect and carpenter for the installation of FBC’s glorious pipe organ, and he built the Singing Christmas Tree used by FBC for several years. His most prideful masterpiece was the home he designed and built in Sheridan for his daughter Becky and her family. Clayton also retired from the Arkansas Army National Guard in 1992 with over 33 years of service as a member of Company B, 3rd Battalion, 153rd Infantry Division of the 39th Infantry Brigade. His individual awards included the Army Commendation Medal, the Army Good Conduct Medal, the Army Reserve Achievement Medal, and the Armed Forces Reserve Medal. In addition, Clayton was awarded the Arkansas Service Medal and the Arkansas Emergency Service Medal. Clayton had a servant’s heart, would always be available to help a friend, and always had a smile and warm handshake or hug for everyone. His positive outlook and willing spirit were contagious and endeared him to his family, friends and community. He was a devoted, loving son, brother, husband, father, uncle and Pappaw. He loved camping and was an avid fisherman, so if he ever had a few spare minutes, you might find him in his fishing boat. Clayton was preceded in death by his parents and younger brother, Ralph Norman Cochran. He is survived by his wife of 68 years, Jean McMurry of Fordyce, and daughters, Becky Bryant and husband Andy of Sheridan, AR, and Gwynne Dunlap and husband Billie of Lexington Park, MD; five grandchildren: Drew Bryant of Sheridan, Alex Bryant and wife Holly of Sheridan, Mary Kathryn Bryant of Dunwoody, GA, Jeanna Dunlap of Denton, TX, and Cara Dunlap of Fort Worth, TX; three great-grandchildren: Carter Judkins, Harleigh Raye Threlkeld, and Beau Bryant. Other survivors include his sister-in-law, Joan Hill of Diamondhead, MS and brother-in-law Jim McMurry and wife Nancy of Sherwood, AR, as well as loved niece and nephews and a host of friends. Visitation will be Friday, November 16, 6:00 pm until 8:00 pm at Benton Funeral Home in Fordyce. Funeral services will be held 10:00 am Saturday, November 17,at Benton Funeral Home in Fordyce with burial at Stoney Point Cemetery in Fordyce, officiated by Bro. Rusty Ross. Arrangements by Benton Funeral Home of Fordyce. The family would like to extend their sincere thanks to the staff of St. John’s Place for their care and support. In lieu of flowers, memorials may be sent to First Baptist Church, 501 N. Main, Fordyce, Arkansas 71742.

CLAYTON RUSSELL COCHRAN, 86, of Fordyce, went to be with his Lord and Savior on Sunday, November 11, 2018. His loving wife Jean was by his side. He had been a resident of St. John&#8217;s Place in Fordyce nearly five years. Clayton was born... View Obituary & Service Information

The family of Clayton Russell Cochran created this Life Tributes page to make it easy to share your memories.

CLAYTON RUSSELL COCHRAN, 86, of Fordyce, went to be with his...

Send flowers to the Cochran family.