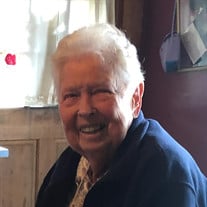 Betty Jo Atwell Dixon of Jersey, Arkansas passed away in her son’s home Saturday, February 15, 2020, in Jersey, Arkansas. She was born August 26, 1930 to the late William Clifton and Doris Lee Webb Atwell in Warren, Arkansas. Betty was a member of Shady Grove Baptist Church in Jersey. She was a graduate of Hermitage High School in 1948, where she loved playing basketball and was said to be a great player. Betty went to work for News Times Publishing in El Dorado, after graduation, where she was employed when she met the late George Horace Dixon. They were married August 20, 1951 in Greenville MS. After they were married, they moved to Virginia and later to Minnesota. When they became tired of the cold weather, they moved back to Arkansas and purchased a small farm in Jersey. Betty worked on the farm with her mother, milking and feeding cows and bush hogging in the summer, long before tractors had cabs. She would get into a wasp nest, come in and put baking soda on the sting and go right back to bush hogging. In the early 70’s, she began to sell plywood and later lumber in Jersey near their home. In the late 70’s, they built a country store where she was known to so many as Mrs. Dixon. George continued traveling with his career in the electrical field until his retirement. George preceded her in death, on Feb 5, 1993. She was known as a savvy business woman and an excellent provider for her family. She continued to operate the store into her late 80’s, till her health began to fail her in February 2019. One of her favorite sayings was “you can be give out, but you can’t give up”. She loved to see hay being baled and cows grazing. Once Denny had stuck the tractor and after much protesting, she climbed onto the bull dozer and pulled the tractor out and climbed right back down and went back to the store. Afterwards, she said that between George and Denny she had operated everything but a power saw. Surviving is her son Dennis Dale Dixon of Jersey and their dog, Roscoe; granddaughter Sarah Brockwell and great granddaughter Paisley of Crossett; special caregivers, Ruby Bush, Mallory Benson, Deannie Gardner, and Susana Velez and Rosalia Hernandez. She was preceded in death by her beloved sister, Martha Jane “Did” Broach and her spouse, Leonard Martin Broach. Visitation will be Sunday 6:00 pm until 8:00 pm at the family home, 208 Bradley 1 South, Jersey, Arkansas 71651. Funeral services will be 2:00 pm Monday at Shady Grove Baptist Church in Jersey with Rev. Ronald Neely officiating. Burial will follow at Shady Grove Cemetery. Pallbearers: Mark Pennington, EdMundo Velez, Juan Velez, Greg McDougald, Mike Webb, Skipper Barner. Honorary pallbearers: Mike Gauldin, Andy Anders, David Burnside, Lathan Erwin, David Mann, Dr Kerry Pennington, Karen Richardson, APN, Bradley County Medical Center Home Health, Medical Staff at Medical Center of South Arkansas, Life Touch Hospice. In lieu of flowers, donations may be made to the Life Share Foundation @2301 Champagnolle Rd, El Doardao, AR 71730. Arrangements by Benton Funeral Home Fordyce. To sign the online register visit www.bentonfuneralhome.net.

The family of Betty Jo Atwell Dixon created this Life Tributes page to make it easy to share your memories.

Betty Jo Atwell Dixon of Jersey, Arkansas passed away in her...

Send flowers to the Dixon family.