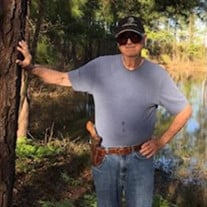 Mr. Allan Wayne May, 83, was born on November 13th, 1938 in Kingsland, AR, and was the first-born son of Marvis and Bertie May. Allan grew up with a natural work ethic and was granted a driver’s license at the age of 13 due to his father being hospitalized for a period of time. He helped work the family land and cotton fields as a child and drove a school bus during his high school years. After high school, he joined the U.S. Navy. During a tour in Japan, he met his wife Akiko and they married in 1961 and started their family with twins, Judy and David, who were born in 1962. Their daughter Kay was born three years later and completed their family. Allan served his country for 20 years in the U.S. Navy and was stationed in Japan, Tennessee, California and Virginia, before retiring from the Navy and returning to his family’s homestead in Kingsland. He then embarked on a second career working security at the Pine Bluff Arsenal for 35 years and took pride in being an active member of the New Edinburg Volunteer Fire Fighting Department until he retired. “Not Self but Country” is considered to be the Navy’s motto and Allan encompassed that motto by being fiercely and steadfastly patriotic. He loved his country and was honored to serve it and his community to the best of his ability, often striking up conversations with fellow veterans that were both friends and strangers. He developed a love for model trains while living in Japan, which led to his favorite hobby of building model train railroads and towns, to the delight of his grandchildren. Allan enjoyed his wife’s southern cooking, particularly cornbread and peas and biscuits and sausage. He also enjoyed gardening, photography, classic country music, beachcombing, dining out, caring for his pets, as well as road trips across the country to visit his daughters and grandchildren. Allan will be remembered most for being a loving and supportive husband, father and grandfather to his family. One of the Navy’s slogans is “Forged by the Sea,” and Allan exemplified that slogan through his ability to overcome many health challenges throughout his life. Allan passed away peacefully at home on March 31 due to natural causes. Allan was preceded in death by his infant son David, his loving wife of 59 years, Akiko, his brother Roger and his parents. He is survived by his eldest daughter, Judy Bingham and husband Eric of Whidbey Island, WA; his youngest daughter, Kay Spurlock and her life partner David Rodriguez, of Kingsland; as well as his grandchildren: Erianne (Michael), Aaron (Jessica), Kyle (Amy) and Alaina; and great-grandchildren: Emily, Benjamin, Soren, Ella and Thorsten. He is also survived by his brother, John May, and sister Nancy Sisk. For those who would like to pay their respects and visit with the family, a joint memorial gathering for Allan and Akiko will be held at Benton Funeral Home on Monday evening, April 4th from 6:00-8:00 pm. Arrangements are by Benton Funeral Home of Fordyce. To sign the online register visit www.bentonfuneralhome.net.

Mr. Allan Wayne May, 83, was born on November 13th, 1938 in Kingsland, AR, and was the first-born son of Marvis and Bertie May. Allan grew up with a natural work ethic and was granted a driver&#8217;s license at the age of 13 due to his father... View Obituary & Service Information

The family of Allan Wayne May created this Life Tributes page to make it easy to share your memories.

Send flowers to the May family.